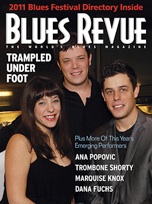 The Late Show plays just as its title suggests it might, exhibiting a lengthy gush of talent and artistic vision. Barry Levenson cut his teeth as a session guitarist in his hometown Detroit before relocating to Boston for Berklee [School of Music], where he studied arranging. During that time he also shared the stage with many of his heroes as the house guitarist at Boston's famed Sugar Shack Club. Now he's in Southern California where he continues to be an in-demand studio player and a member of blues and boogie kings Canned Heat.

On this stunning album, his fourth since his acclaimed 1998 debut, Levenson honors his inspirations with 15 songs that all run deep and wide across the soulful blues spectrum.

Beginning the set with “Riley's Shuffle/Blue Tears” may not have been the best move due to the perfunctory groove at the song's outset but don't be put off. The intention is clear, and by the time the “Blue Tears” section falls, the music seethes as if Stevie Ray Vaughn is in the house honoring B.B.

The big swinging arrangement of “Whole Lotta Blues” has Ronnie Earl written all over it, and Mary Williams' vocal sets the standard for her combination of soul, grit, and range. Johnny Dyer steps up to the mic for “One for Muddy” and he's smooth, natural and as effective as can be, even pushing the Muddy inflection a tad. “Meters Running” is a cleverly titled airy romp for the New Orleans institution, and in “Turn Up The A.C.” Levenson's tone within the sharp, horn-blasted funk surely evokes Albert Collins, but he never loses sight of his own individuality, most apparent in one particularly fine arpeggio he rolls out at the bridge. “Slippin Down Blues” has the great Finis Tasby singing within a lush arrangement; while Levenson's ripping solo is so tastefully thrilling it threatens the very fabric of the tune. For “Charlie's Ride”, Levenson went for a Charlie Christian type of tribute with touches of Les Paul and T-Bone Walker. He succeeded beautifully. Fans of classy, multi-faceted blues guitar will be staying up all hours of the night with The Late Show.